I am not a big fan of Superhero movies. Why you may ask? I don’t know. It could be that I have 2 sisters and comic books literally never entered our house. It could also be that I was too busy watching ‘I Love Lucy’ re-runs to even notice that Batman and Superman lunchboxes were sweeping the nation. Or it could also be because I don’t have enough time or energy to watch the 67 Superhero movies that have already been made with characters I’ve never heard of. For whatever reason, Superhero films were just not my cup of tea. UNTIL NOW. I need to make 3 statements about this film now and will then expand below in my oh-so-predictable list: 1) “Aquaman” is Hunkalicious 2) I am still confused about a lot of things 3)This movie rocked. 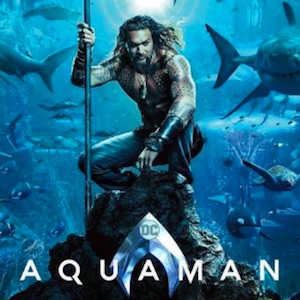 1) “Aquaman” is Hunkalicious – WOWIE where has Jason Momoa been all my life? yea, ok, he’s been in like 20 movies already, but none of them were quite this good. Also his eyebrows are like one pluck away from being creepy, so props to the make up crew for keeping him classy and gorgeous!

2) I am still confused about a lot of things:

a) Where did Nicole Kidman come from? Who shot her? Why did the crazy water men in storm trooper outfits not find her immediately after the attack? I don’t understand how Atlantis is so ahead of it’s time and yet so bad at finding their queen. I mean, I’m happy she was able to give birth to Aquaman, but I’m also having a hard time grasping how she could go YEARS without being discovered. No comprendo.

b) Why didn’t Nicole and her new fam just MOVE? If you find out your water breathing abusive husband is hunting you down why do you continue living in a LIGHTHOUSE? Move!! Find a landlocked country for goodness sake! Or try Kansas or Nebraska or Iowa! 100% the Atlantian super troopers would not survive in Nebraska long enough to find you. I don’t get it. There were so many other things you could have done instead of RETURN BACK TO THE SEA!

c) Exactly how strong is Aquaman? Cuz like in one scene he is literally lifting up a submarine filled with dozens of men and oh yea – it’s a submarine! And then in another scene, he’s getting his butt kicked by a guy in a bug-eyed costume. What are your strength boundaries? Can you lift crazy heavy objects but then can’t fist fight well? Is it like cross-fit athletes where they can lift hundreds of pounds above their head, but then they throw a frisbee and it doesn’t go very far and then lands on its’ side and starts rolling back to them a little? I need to see these strength boundaries please.

d) Never in my life did I ever, seriously EVER, think I’d see the day where Willem Dafoe was NOT a bad guy. WELL SLAP MY BUTT AND CALL ME SALLY. What the actual heck. You CANNOT look like Willem Dafoe and just be a solid supporting positive character! That’s ridiculous. I do not accept. I demand a recount.

e) The bug-eyed pirate man needs to CHILL. He is too angry for his own good. I will personally chip in for a deep tissue massage because nobody needs a sequel where the villain is once again an angry son. There’s too many angry sons out there and they all need some spa days to relax and re-prioritize! Take a minute, refocus, go back to school and REACH YOUR FULL POTENTIAL!

Even though there were multiple layers of misunderstanding on my end AND I still struggle to find the obsession with Superhero movies as a genre – I loved Jason Momoa in this film and was thoroughly entertained the entire 2 hours and 22 minutes of it. Enjoy watching Willem Dafoe NOT betray someone he loves for his own selfish gain and instead just do the right thing time and time again (eye roll).