AMERICA EXPLAIN. How did this win Best Picture? Actually, how did this even get nominated for Best Picture? This movie is literally just a live action version of The Little Mermaid in reverse combined with some aspects of Beauty and the Beast and Tangled. Also, the random Russian spy subplot was completely unnecessary. Why do we have to add evil Russian people in every movie? Is anyone entertained by that?! If you are, please stop. You’re ruining movies for the rest of us. 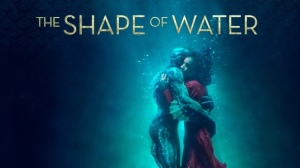 Now I’m not just going to make wild accusations for the fun of it, I will prove to you how The Shape of Water is actually a combination of a bunch of Disney films IRL.

Plot Summary: Main character is a Mermaid and second main character is a human. They meet under dire circumstances and one saves the other’s life. They fall in love even though they can’t communicate other than through physical touch and eye contact. The antagonist in the film tries to capture the human and kill/own the Mermaid. The antagonist underestimates both the Mermaid and the human and ends up being killed. The Mermaid has healing powers (Tangled) and cures the human from all antagonist damage and they both end up as Mermaids (Beauty and the Beast/still The Little Mermaid but in reverse).

The two best friends are basically Flounder and Lumiere and out of anyone in the film- they are the most interesting (just like The Little Mermaid).

The antagonist is also so creepy I can’t handle it. What’s with the mints? Or are they drugs? That was left as a fun mystery. Also, quick personal question: when your fingers are black and rotting, is it wise to RIP THEM OFF? Like maybe go see a doctor? Or a butcher? Or do something other than pull them off yourself?!? Goodness gracious.

In summary, if this movie were titled “The Big Mermaid” or “The Little Merman”, I think I would have enjoyed it more. I went into this film thinking it would be crazy original, emotionally moving, and straight up brilliant considering that it won Best Picture and Best Director. However I was extremely disappointed as I felt that I had just spend 2+ hours watching a modern version of a Disney film I didn’t really want to see in live action.

I’m sorry if you liked this movie and this review hurt your feelings. Well, I’m not actually sorry for you, I’m sorry for me because I had to watch this film that all of you liked.