I am at that age where I find teenagers in movies to be incredibly obnoxious because they are so ungrateful and rude. BUT, I am also not a parent, so I find what the parents in these movies do to be equally annoying! Needless to say it’s a lose-lose for me when watching a recent Hollywood parent-teen movie. However, I found myself in theaters last week watching “Blockers” and without getting too carried away with the parent/teen attitude issues, I’d like to tell you my other complaints about this movie. Here ya go. 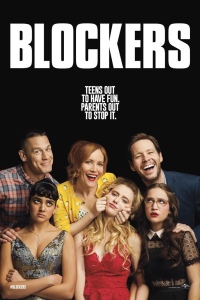 If you haven’t seen the movie these complaints won’t make sense, but feel free to read them so you know what to look out for:

1) Do you know a single teenager that keeps their computer sound ALL THE WAY UP?? Literally none. Julie (Leslie Mann’s daughter in the movie) is way too trendy to keep her computer on with the sound all the way up…so the main plot starter of this movie (the parents hearing and then reading the messages on the computer about their kids wanting to lose their virginity on Prom night) is just not realistic. Trust me, the only people in this world that actually keep their computer’s volume cranked up are grandparents that can’t hear and young professionals who think that everyone needs to know when they’ve gotten an email. Also, we don’t, and you need to chill, Kyle.

3) IF THERE ARE ACTUALLY ANY PARENTS OUT THERE OPENLY SHARING THEIR SEX LIVES WITH THEIR KIDS THEY NEED TO STOP. NOW. Like right now. Stop it.

4) I PRO-MISE YOU teenagers are not organized enough to plan an extravagant house party which would then be proceeded by an incredibly nice hotel party. And if they are, what high school is it, and are they hiring?! Cuz those kids are WAY ahead in terms of logistical planning. Also, how did those kids afford those rooms?! Hotel rooms are like $180 a night if you’re looking for a Tuesday night in Bakersfield. How the heck did these kids basically reserve a whole floor?! WHO WAS YOUR EVENT PLANNER?! TELL ME!

5) The scene where John Cena talks to his daughter in the movie was the most eye-rolling scene I’ve ever seen between a dad and a daughter, and I’ve watched EVERY episode of Full House. I can’t.

Overall this movie had some hilarious moments but it was equally balanced with incredibly annoying parent/teen moments. In the end, I would recommend watching this via RedBox or when it’s $5 at Target. Also, you will not learn anything about parenting and/or how to “do prom” from this movie – just a warning. This for sure ain’t a “how-to”.