I’m gonna be honest, I watched the last movie, “Central Intelligence” with Dwayne ‘The Rock’ Johnson and Kevin Hart and I was NOT amused. So I went into this film with extremely low expectations. PLUS I watched the original “Jumanji” with Robin Williams when I was 7 and it gave me nightmares until I was 12. In short, the only reason I wanted to watch this remake was to be able to crap all over the movie in this review. To my complete shock and genuine disappointment, this movie was hysterical and I seriously loved it so much I can’t even. 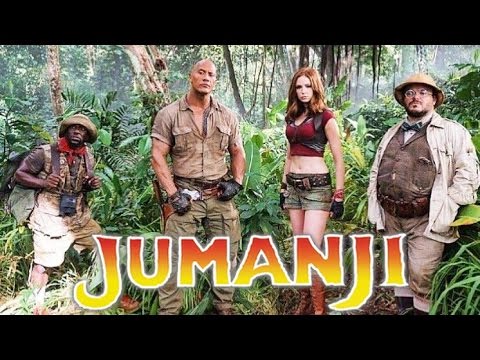 For those of you that are big fans of the original “Jumanji”, first off, what’s wrong with you? And second, you might not like this version because it’s awesome and you clearly have low standards for movies, so enjoy “Pirates of the Caribbean Part 3” and “Maid in Manhattan”.

For you those people with taste, here’s a list of why this “Jumanji” is significantly better than the original:

1) Jack Black was the best part of this film and if I try to give examples as to why, it’ll ruin the effect. Just trust me.

2) The worst part of the original film was the fact that the game invaded their town and their house. Like when the animals came, they literally stampeded through their living room. No Thank You. However, in this version, the players get transported into a Jungle so my nightmares are now a non-issue. Very happy with that cinematic call.

3) Nick Jonas is in this film and his stubble level is perfection. He plays a pilot and he’s beautiful.

4) Because they also changed the game from being a board game to being a video game, they were able to add more elements to this game that made it so much more entertaining. A few examples are: each character got 3 lives (meaning characters could die and then fall back into the game), each character got strengths and weaknesses and some were HILARIOUS, and the “extras” in the game often had a specific and limited dialogue so they would repeat themselves and that added a decent amount of comedy.

5) The character avatars (The Rock, Kevin Hart, Jack Black, unknown female lead) were exact opposites of their teenage characters and it was AMAZING. Without spoiling too much, Jack Black was the avatar of a teenage girl called Bethany and it was the most brilliant move ever.