This is an anime film. I have never seen an anime film before, but I love animations, so I figured I’d take a stab at this genre. MISTAKE. I was so confused the entire time, I didn’t understand any of their names, and everyone looks the same. 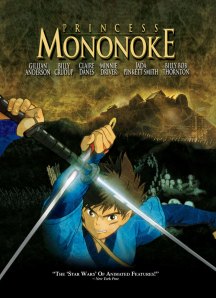 I literally pulled up the plot synopsis on wikipedia while I was watching because I had no idea who anyone was or what was going on. Now obviously the “demons” are bad, but there was a whole army of wild boars, a family of incredibly large wolves, and a town of humans that were trying to make some version of a gun, and they all seemed bad to me. However, the main character, Ashitaka (definitely had to look that spelling up), was trying to help all of them! What a sick joke! What main character tries to help everyone? What is this guy trying to do? Become a saint? I can’t.

Also, why the heck is this movie called “Princess Mononoke”? One of my biggest pet peeves is when the title of a movie doesn’t reflect the movie itself. For example “Second Hand Lions” had nothing to do with animals, “Hope Floats” was the least hopeful movie I’d ever seen, and “The Grapes of Wrath” had absolutely nothing to do with bad wine. And what do all these movies have in common? They are terrible. It’s like seeing a box of cookies titled “Chocolate Delight” but when you open it, it’s a box of whole wheat crackers that look like chocolate, but have absolutely no chocolate in it. THIS MOVIE WAS A BOX OF WHOLE WHEAT CRACKERS.

If you like to watch animation where the words don’t correspond with the mouth movement, go ahead and rent this movie.