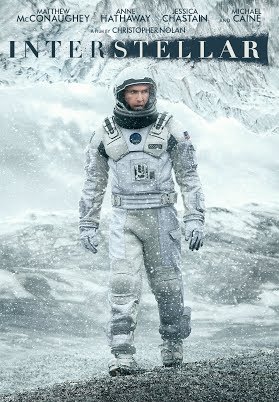 However, this is what I’ve gathered thus far after my second viewing:

1) Dust should be everyone’s number one fear. Kicks quicksand’s butt for sure.

2) Girls are better at math than grown men.

4) Matt Damon sucks as an evil person. Stick with zoos, casinos, and math, Matt – evil astronaut doesn’t work for you.

5) I don’t understand science, or NASA, or math, or robots

In case you haven’t seen this movie let me give you a brief summary so you know what you’re getting yourself into:

Matthew McConaughey is a “retired” astronaut (or something like that), has two kids and lives with his dad. They are living in some futuristic year where the whole world is basically a big dust bowl and everyone’s dying and coughing. Matthew’s old astronaut friend asks him to go check out some planets and see if they can move Earth to another planet. In the meantime, his friend said he’d work on an equation that could also save Earth in some other science kind of way. So, Matthew ditches the fam and heads to space with Anne Hathaway and another guy who used to be an extra on the show “Lost”. He almost gets killed by Matt Damon and then ends up getting left in space with a robot. However he discovers the “fifth dimension” and tries to talk to his daughter when she was a little girl to convince her to tell him to stay home instead of leave. That last sentence might not make sense, but neither does this movie.

Finally, Matthew wakes up in a hospital bed, looking fresh and not a day older from the day he left on his 50 year excursion, and ends up seeing his daughter, who is on her death bed and who also apparently solved the “insolvable” problem and saved Earth. However, her new “planet” that she created is like one small neighborhood so apparently Earth is just one village at this point. The music at the end of this movie tells you that you should be feel happy, but quite honestly, I think the dust won and this movie is just straight up depressing.

Watch this movie if you like feeling confused and/or if you believe everything at face value and don’t need things to make sense for them to be true.