DIRT DIRT DIRT. Remember how I said that Do the Right Thing makes you want to shower because it’s so freaking hot in the movie? The Treasure of the Sierra Madre has the same effect. You want to start hoarding your possessions and wipe your shoes constantly. 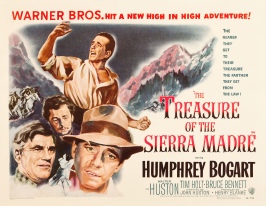 Okay, so the one thing I’m going to harp on is not a main part of the movie, and I get that, but I just have to rant about it. THEY SLEEP WITH THEIR SHOES ON. Ugh. So gross! I literally had to pause the movie to shiver. Basically, there’s these three men, Humphrey Bogart being one of them, and they are on the search for gold. They end up finding this mountain that has tons of gold and they’re all alone, so they “dig” (or whatever the word is for ‘get more gold’) for a year! Not sure where they shower, bathe, or wash anything, but they sleep in their tent… in their work clothes… and in Their SHOES!! Their dirt filled, gold-digging, cave-hunting, shoes. It’s disgusting. I’m pretty sure that’s how you get small pox. I also cannot believe how much of this defined the movie for me. I know the shoe-thing shouldn’t play this large of a role on my opinion of this film, but that is literally all I could think about for 75% of this movie.

Overall, the plot is pretty great. Moral of the story is that too much money corrupts even the purest of souls. I would most definitely show this to young kids to teach them the lesson of sharing. AKA (spoiler alert) if you don’t share, you die.