This is the LAST time I am ever watching a movie based on the cover of the DVD. You see Mark Ruffalo, Jake Gyllenhaal, Robert Downey Jr, and the Golden Gate Bridge and you think “This is gonna be AWESOME! Three of my favorite actors in one of my favorite cities. What could go wrong?” Plus the picture on the front is cloudy which means there’s gonna be some sort of tragic love story (most likely) and maybe even a mysterious past or a Sherlock Holmes sort of situation and you get PUMPED. But then about 4 minutes in you realize it’s actually about a psychopath serial killer and you’re too lazy to change the movie, so here’s my review on a film I most certainly did not want to watch. 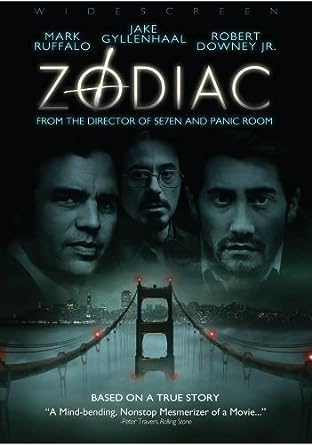 First things first, I am not against thrillers. Quite honestly, I love them a lot even though they definitely still give me nightmares. I love the mystery and the creepiness without the completely unnecessary frightening bits that horror movies have. Thrillers are the classier version of horrors, and horrors need to stop pretending they are anything other than a series of pointless jump scares! The ONLY issue I have with thrillers (other than my nightmares) is that some of them go unresolved. Why would you do that to me? Who creates a totally uncomfortable and disturbing story line without a resolution?! Oh, wait, this is based on real life? *hard swallow*

Yea, so guess who stayed up til 1:00am doing research on the Zodiac killer? this girl. I literally could not sleep until I read enough evidence that the Zodiac killer was for sure dead/no longer on the hunt. I am currently sleeping with a baseball bat next to my bed as well as some wasp spray because it shoots up to 20 feet away and will most definitely blind someone if sprayed directly into the eyes. I am on incredibly high alert now and find myself yelling “Not today Satan!” anytime I hear an unexpected noise. Other than that, this movie had little to no effect on me.

The only thing that really truly bothered me about this film (other than the fact that the entire plot was ridiculously disturbing) was that Dermot Mulroney was in this movie and not once did he take his shirt off! How rude! When was the last time you saw a Dermot film without at least one shirt-less scene? Is your answer never? Cuz never is correct. He has never once done a film where he doesn’t at least get partially undressed. It was incredibly disappointing and quite honestly ruined whatever tiny part of this film was left to give me hope. I am officially suspicious of everyone now and I can’t even rely on the one thing that I thought would always be true: Dermot Mulroney would always be found shirtless on film. Last night was filled with so much disappointment.

Finally, I must say that Jake Gyllenhaal’s wife in this film is probably the most patient woman that’s ever existed in America. The fact that she didn’t blow a gasket every time he clipped a newspaper or watched the TV is beyond me. I hope she treats herself to a massage weekly, cause boy does she deserve it!

Popcorn Rating: 2 popped corns – too creepy to be good

I know that this movie was made very well and acted out very well, but it was just so dang creepy and, unfortunately, based on real life, that I can’t bring myself to like it. I will let you know when I start to trust people again, but for now, wasp spray it is!