The “Pitch Perfect” movies are basically the premium version of the “High School Musical” movies. You think I’m wrong? I’ll prove it to you. 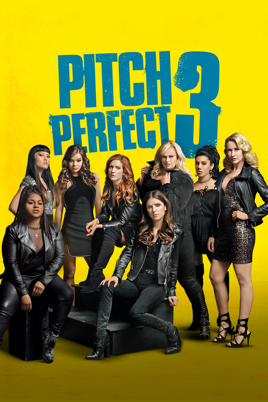 The first film aka the OG was spectacular and catchy and had lines you could quote ALL DAY i.e. “I’m horizontal running”, “Love you awesome nerds “, and “Gotta getcha getcha getcha getcha head in the game”, etc. Plus, in the first Pitch Perfect, Anna Kendrick and her male lead are not allowed to be together due to the female acapella group hating on the men’s acapella group similar to how Troy and Gabriela couldn’t be together because nerds and jocks don’t like each other in high school. Parallel movies so far – I think yes!

Moving on to Movie 2 – in the sequels to both of these classics, everything just gets worse. The romance is worse, the songs are worse, the plots are worse, and the extra characters do NOTHING to the overall balance and blend of the original group. On all fronts, both sequels are garbage. The only positive part of Pitch Perfect 2, specifically, was when the German acapella group sang – cause they were dope.

Finally, we get to our 3rd installment of the series. I was incredibly hesitant with “Pitch Perfect 3” because “High School Musical 3” was another bust. It was better than HSM 2, but that’s not really saying much. My real issue with HSM 3 is that Sharpay is STILL the “bad girl”! Making the same high maintenance teenager the enemy for all 3 movies is just overkill and quite frankly, uncreative. She just wanted to be “Fabulous”, and clearly she learned everything from her parents, who, by the way, are major pieces of work. So really, we should be unpacking her family background and trying to help her become a decent member of society, but instead we’re just watching her continue to sing badly and hoping she’ll embarrass herself enough on stage to distract from the fact that long distance relationships in college will NEVER work out if you look like Zac Efron. There is no realistic happy ending.

As you can see, I was extremely hesitant to invest in another 3-movie work, but after some delay and a convenient HBO GO account I stole from my sister, I decided to sit down and commit to completing the PP series. To my surprise, it was Mondo-Fabulous. I loved every minute of it! I laughed out loud at some points and loved all the songs and new cast members. I am also SUPER glad that Anna’s character did not fall in love with DJ Khalid’s assistant because it would have been far too predictable and ultimately disappointing since she can honestly do so much better! I mean, we don’t even know if he can sing OR dance…..so really, where’s the allure?

Here’s the short list of reasons you should watch Pitch Perfect 3 and complete the trilogy if you haven’t already:

2) DJ Khalid is in it and he’s quite entertaining

4) Hailee Steinfeld is no longer annoying, and even though she single handedly ruined “Pitch Perfect 2”, her contribution in this 3rd film almost makes up for it. keyword: almost.

5) The riff off in this movie is the best

I genuinely believed that “Pitch Perfect 3” would be pretty terrible so I didn’t even make any popcorn to watch it! I am so upset with myself because this movie was popcorn-perfect and I just misjudged the trailer so hard. It’s definitely not as brilliant as the first “Pitch Perfect”, but it came real close. Definitely better than the 2nd and far better than HSM 2 & 3 combined! Yep – I said it. HSM 2 & 3 COMBINED.