If this movie doesn’t make you want to start a non-profit and adopt a child from Africa then you need to take a good look at your life and change who you are.

Was this movie incredibly hard to watch? yes. Was Angelina’s character pretty unrealistic? also yes. But will this movie make you cry, fall in love with Clive Owen, and join a cause to end world hunger? OH FOR SURE. 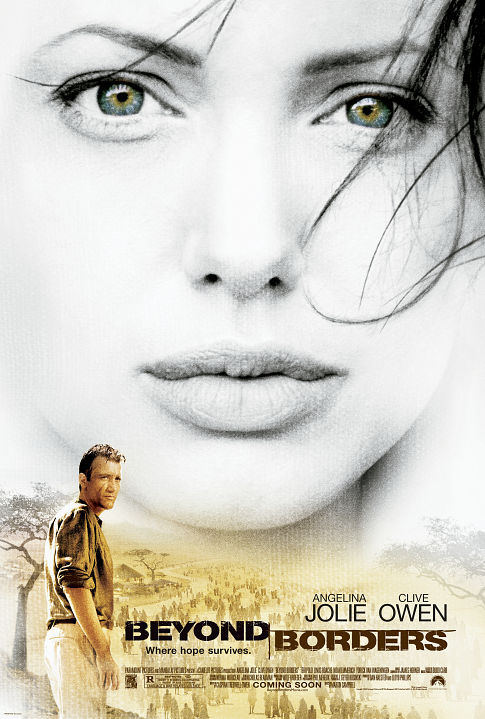 I had legit never heard of this movie or even knew that it came out 15 years ago until Netflix recommended it to me. So naturally I googled it and under “Clive Owen films” it popped up as #6 so I figured “top 10 – must be good”. After watching the film, I started searching my Netflix history to try and understand WHY THEY THOUGHT THIS WOULD BE RIGHT UP MY ALLEY. I don’t know how this happened, but I’m planning to look into it.

Now even though I don’t think “Beyond Borders” is a natural recommendation after watching “Kissing Booth” and all the Camp Rocks this summer, I actually really liked this movie. It was super hard to watch for about 95% of the film (not sure if I really need to admit that seeing a film about poverty in the world would be hard to watch), but if you can be strong enough to sit through this – you will sob multiple times and also get your heart broken at the end, but you will hopefully feel motivated to do good in the world. (Please don’t get mad at that spoiler because this movie came out 15 years ago and quite frankly doing a [spoiler alert] for a 2003 film just seems extra).

Here’s what makes this movie great in a film-watching sense, not in a the-context-of-this-film-is-uplifting way:

Was this the best film I’ve seen lately? no. Is this movie an even more depressing version of “A Walk to Remember”? yup. Will this make you want to be a better person? HOPEFULLY. So please grab some tissues, get in your jammies, grab a blanket for comfort, watch this film, and change the world.